A historical look into tax evasion. 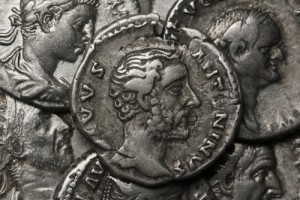 issues. However, I have a passion for history, so I thought I would take a minute to introduce this article by starting with the broader topic of the history of Tax Evasion.

The known history of offshore tax evasion dates back as far as the Emperor Augustus, when he was known as Octavius and ruled in the Second Triumvirate with Mark Antony. One of the main issues of contention that Augustus experienced with Mark Antony was Antony’s manipulation of currency conversion and tax rates between the Roman coinage of the time and the Egyptian currency, the Greek Drachma. Antony’s machinations made him monstrously wealthy in Egypt (paying less or zero tax while Augustus ended up picking up the tab in Rome). In an interesting twist, Mark Antony learned this technique by watching it previously used by Octavius’s uncle Julius Caesar to the disadvantage of Cleopatra’s brother Ptolemy XIII.

As ill will built up between Augustus and Mark Antony, civil war broke out. After Augustus defeated Antony and Cleopatra at the Battle of Actium in 31 BC, Augustus was named Pharaoh, and Egypt became his personal possession. This event marks the beginning of the Roman Empire and Pax Romana.

Augustus learned his lesson very well and took proactive steps to stamp out any further tax and currency manipulation in the empire by creating an echelon of lawyers to understand and ensure the proper tax consequences between domestic (Rome) and foreign (Egypt, Gaul, Germany, Judea) jurisdictions at a higher level. This eventually led to the Legum Magister (meaning “master of laws”) or Tax LL.M designation. As stated in the book of Matthew, “Then render to Caesar the things that are Caesar’s.”

Now back to the main topic at hand. In modern day, the use of tax havens for tax evasion purposes has been a concern of the United States government since the mid-1950s. The IRS began a series of investigations that laid the foundation for the current offshore initiatives by the Department of Justice and the Offshore Voluntary Disclosure Program (OVDP) conducted by Civil Examination Offshore Voluntary Practice.

Before we begin the modern day history lesson, let’s define the term tax haven. It is a jurisdiction where non-residents can save taxes by conducting various investments, transactions and/or activities. Attributes that make a jurisdiction a successful tax haven include low or zero tax rates applicable to foreigners, bank and financial secrecy laws, reliance on banking as economic activity, tax haven promotion (sometimes linked to “treaty shopping”) and highly developed communications, financial and legal infrastructures to support the tax haven low-to-no-tax objectives.

The so-called Swiss Mail Watch by the IRS began from investigations conducted in 1966 to 1967 in regards to large deposits into New York banks that were consequently transferred to banks in Switzerland. The IRS task force Swiss Mail Watch included IRS agents from Civil Examination, Criminal Investigations and International Operations. The task force worked closely with the United States Postal Service to monitor mail from banks in Switzerland to taxpayers in the United States.

In 1968, the task force was able to attain 8,500 names. These names were eventually whittled down to 168 individual taxpayers that were subsequently audited by Civil Examination. These efforts did not prove fruitful as only $2 million in taxes and penalties were assessed. The IRS repeated these efforts in 1969 and 1970 but they also proved unfruitful for various political reasons.

The Bahamas, Pirate and Tradewinds Projects

In 1970, the Bahamas Project picked up where Swiss Mail Watch left off. This is the first investigation that produced a “facilitator.” A facilitator is an individual that actively markets offshore tax evasion schemes to U.S. taxpayers. This investigation proved fruitful for the IRS as it led to $100 million in tax and penalties via hundreds of civil audit cases.

Concurrently with the Bahamas Project, the IRS conducted Project Pirate and Operation Tradewinds. The first involved an official of Grand Cayman Island who was promoting bank accounts on the island to U.S. taxpayers. The results of this investigation are unknown as it was terminated abruptly in 1975 as was Operation Tradewinds. The focus of the investigation was Bahamian trust and bank accounts.

The coup de grâce for IRS offshore investigations from the 1950s to the late 1970s occurred with Project Haven. This investigation occurred due to the trafficking of narcotics. The funds from the sale of illegal drugs were deposited in the Bahamas. When the individual responsible for these efforts was detained, he then informed the authorities of banking practices that linked U.S. taxpayers in big cities such as New York, Miami and Chicago to the banks in the Bahamas. The secondary investigation identified three hundred taxpayers committing tax evasion. This investigation was shut down due to “tactics” employed by IRS agents during their covert operations that the public deemed undesirable.

In the new millennium, the first offshore program conduct by the IRS was the 2003 Offshore Credit Card Program (OCCP). This initiative focused on credit and debit cards that were issued by offshore banks (Antigua and Barbuda, the Bahamas, and the Cayman Islands) as a method to evade income tax and move the non-taxed money without detection by the IRS. The IRS used a technique called “John Doe Summons” to American Express and MasterCard to detect and identify the taxpayers involved in this scheme with over 30 tax haven countries.

On January 14, 2003, the IRS announced the OVCI initiative aimed at bringing taxpayers who used “offshore” payment cards or other offshore financial arrangements to hide their income back into compliance with the tax law.

Under OVCI, eligible taxpayers who voluntarily came forward would not face civil fraud and information return penalties, but still had to pay back taxes, interest and certain accuracy or delinquency penalties. In the request to participate, the taxpayer had to provide full details on those who promoted or solicited the offshore financial arrangement (i.e. facilitators). The OVCI deadline was April 15, 2003.

In 2005, Bradley Birkenfeld was working for UBS when he uncovered internal documents that appeared to serve as backup documents to help shift blame away from UBS to individual employees if the bank was ever caught by the IRS for its unethical practices. Birkenfeld indicated that he reported this up the ladder to UBS Internal Compliance and received no response.

In 2007, Birkenfeld “blew the whistle” under a new whistleblower program in hopes of receiving a 30 percent reward of any monies uncovered. Birkenfeld also wanted immunity from prosecution which led eventually to stalling of talks and his arrest at Logan Airport in 2008. Birkenfeld eventually plead guilty and assisted the Department of Justice in its efforts to prosecute UBS.

OVDP and Other IRS Programs

In 2009, the IRS introduced the first Offshore Voluntary Disclosure Program (OVDP) as a path to allow US taxpayers to come back into compliance and avoid criminal prosecution.

One of the big takeaways from these investigations was overcoming the assumption of an accessible paper trail. These investigations have proved this assumption to be erroneous. In turn the IRS realized that it faced extreme difficulty in detecting tax evasion through offshore methods under its normal civil enforcement arm (hence heightened FBAR scrutiny, new triple matching internal systems, FATCA, etc.).

In consequence, the IRS Criminal Investigations division in conjunction with the Department of Justice is now heavily involved in the reconstruction of financial documents due to its resources and experienced agent training.